The Atsuta Shrine is famous shrine dedicated to the Kusanagi sword (sword of the rustling) which is one of three kinds of sacred treasure.
In the beginning of year, I designed the "Ryugaku Shinto" which is done by calming the spirit of the earth and wishing for mischief and invitation.
It is an original work of Ukiyo woodcut, which trimmed the pictures of ryugaku priests and designed them into woodcut prints.
It is an innovative work that pioneered a new process of making traditional woodcut prints based on photographs. 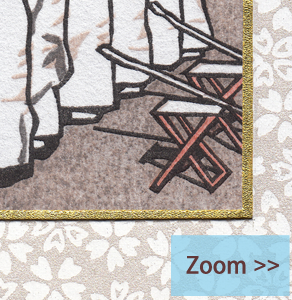