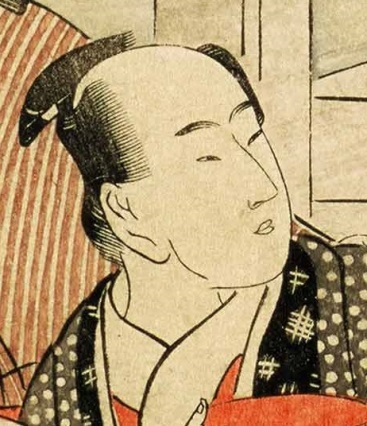 Utamaro Kitagawa  (喜多川 歌麿, 1753? – 31 October 1806)
Utamaro Kitagawa is one of the most famous Ukiyo-e artist, especially for bijin-ga (portraits of female beauties),
but it is little known about his life and career.
He was born either in Edo, Kyoto, or Osaka, or in a provincial town, probably in 1753.
His original own name was Ichitaro Kitagawa, his first business name was Toyoaki, and later changed to Utagawa.
While he was still a child, he became a pupil of the painter Toriyama Sekien who is belong to Kano group, he started to draw for picture books and Yakusha-e (picture of Kabuki actors).
After publisher Tsutaya Juzaburo recognized his talent, he grew up his talent to draw bijin-ga and he created original drawing style for female portrait called Ookubie which is close to face and describing detail expression of gesture and finger, it is expressing various deep psychology of the woman.
He drew a lot of charming and beautiful female pictures for down-town girl and hostess of night club,
and he became the best Ukiyo-e artist of bijin-ga.
In those days, Bakufu (the government of Edo period) forced economy on the common people for financial reduction, and Bakufu interfered with his drawing flashy work.
However he drew satirical pictures for Bakufu, he was thrown into jail for 50 days.
After the released, this imprisonment gave a bad influence on his life, he was dead two years later.

Sharaku Toshusai  (東洲斎 写楽, 1794?–1795?)
He is a Ukiyo-e artist who is famous for portraits of kabuki actors and sumo wrestlers.
He appeared suddenly in the world of Ukiyo-e and he drew 140 several pieces of Ukiyo-e
during a slightly period of 10 months, and suddenly disappeared.
There are various opinions who Sharaku is and he is a person with many mysteries up to now.
Regardless of beauty and ugliness, he described actor's character too vivid, it was hard to accept for people at that time. That might be the reason why he disappeared in the short term, but his dynamic kabuki actor's pictures give a fresh impression to current people.
In 1910, German collector Julius Kurth introduced that Sharaku is one of the three major portrait painters with Rembrandt and Velázquez in his book "Sharaku".
Since then, his global evaluation has been increased.